To say that Gia was a surprise would be an understatement. After needing fertility treatments to have my son, Nicholas, I found myself pregnant AGAIN when he was three months old. Ready or not, Gia came into our lives just nine months later.

I was terrified at the thought of bringing home a second baby, but Gia made it not so terrifying. She was your typical baby – as long as her tummy was full and her diaper was changed, she was happy. She slept through the night at eight weeks old, smiled like it was her job and let her brother be the star that he so desperately wanted to be.

In the first year of Gia’s life, she met all of the standard milestones on time – she rolled over at four months, sat on her own at six months, crawled at nine months, and walked at twelve months. She babbled constantly, but had yet to say a real word by her first birthday. I wasn’t concerned and neither was our pediatrician.

Gia’s 18-month checkup came, and still no words to speak of, just a lot of gibberish. My son was a late-talker, so I didn’t think much of it. I was looking at a healthy, normal little baby, and I figured that the pediatrician would see that too. I was wrong. “I’m going to flag her in the computer for Autism” she said to me, “speech delay can be an early sign.” Two thoughts went through my head: one, “Oh my god, my daughter has Autism!”, and two, “What a B****! My daughter does not have Autism!”

From that day until Gia turned two years old,  I found myself studying everything my daughter did. She would do something that I decided was “weird”, and I would promptly run and google it. It was insane! I felt like my brain had been poisoned with this toxic information that I just wanted to go away. I stopped enjoying this happy, and carefree little girl in front of me, and became consumed with what everything meant.

After a long six months, we made it to Gia’s 24 month checkup. With just five intelligible words, I was dreading this appointment. The first thing that Gia did, was take a standard Autism screening that they give to every child at this age. The doctor came in with the results, and said she had no flags for Autism. I was relieved, yes, but I was angry too. I was angry at her and I was angry at myself.

If at 18 months of age, it was standard protocol to flag a child for having no words, than click the flag and keep it to yourself! Why did she feel the need to make such a blanket statement with absolutely nothing to back it up? I was probably even more angry at myself. Why did I let this control me the way it did? I needed to stop studying Gia and start helping her. I left the office with a referral to Early Intervention. Gia was severely speech-delayed and I could no longer deny that.

r the next six months, I went through a different kind of phase. I felt like I was sitting back in a nice recliner, enjoying the good life – the life without Autism. It’s not like there’s anything else to worry about, right?

Due to my new-found attitude, I chose to do “indirect” therapy through the state, which is basically receiving emails from your therapist on things you can do at home to encourage speech. I figured, hey, I can do this! Gia gained some words, but it was at the same pace she always had. I wasn’t seeing the sudden breakthrough that everyone tried to tell me she would have. I was seeing a frustrated little girl, who needed more than I could give her.

When Gia turned three, she had one more standard Autism screening and was cleared once again. She went on to qualify for speech through Priority Preschool. She would be in a classroom setting with other kids, with various delays/disabilities. Like everything else along the way, I had mixed emotions about this too. I was relieved and excited to finally get her the therapy she needed, but I continued to suffer from some lingering denial. Why was my daughter in a “special needs” classroom? She didn’t have special needs, she just needed to learn how to talk, right?

After the first quarter of school, we received Gia’s very first progress report. She had made some progress, but nothing worth announcing. By this time, my husband was very concerned. For the most part, he had let me take this “speech thing” on, and do what I thought was best. Now he was sitting me down and telling me, “Sheila, I’m worried about Gia. I think there might be something more.” I knew in my gut he was right, I could feel it, but I argued with him anyway. I cried and then I argued, and then I cried and then I argued. 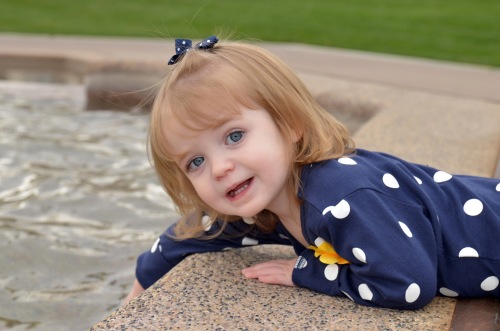 I emailed Gia’s therapist the next morning, and asked if she and the teacher could meet with us. We met a couple days later, and I just knew that they were going to tell my husband he was way off-base, I just knew it! I was wrong.

From the moment we sat down together, I knew this wasn’t going to go the way my denial had lead me to believe. “Gia is not making the kind of progress we’d like to see.” she says, “I believe Gia might have something called apraxia.” “Apraxia?!”, I said. “What’s that?”

Apraxia of Speech is an uncommon, neurological speech disorder. In childhood apraxia, the brain struggles to develop plans for speech movement. As a result, children with CAS don’t learn accurate movements for speech with normal ease. In CAS, the speech muscles aren’t weak, but they don’t perform normally because the brain has difficulty directing or coordinating the movements. Children with speech apraxia often have far greater abilities to understand speech than to express themselves with spoken words. The majority of children with apraxia will experience significant improvement, if not complete recovery, with the correct treatment.

4 thoughts on “How our story begins…”